In my world: Replica

Sometimes in the middle of cleaning the rooms, I discover little gems left behind by the children. This Friday series was started with the intention of celebrating the imagination and creativity in a young child’s world…and hoping that it’ll bring a little ray of inspiration and joy to your day, as it does mine.

Kids Say: What do you want for Christmas?

Years ago when my brother and I asked my dad the same question, it baffled us completely when my dad gave exactly the same response.

I guess I understand now, what my dad meant back then.  As parents, we really don’t need presents from our children.  If they do not forget what we’ve taught them, seek the wisdom of God, and keep to His paths of righteousness, that is more value than any money can buy.

We visited the Maritime Experiential Museum & Aquarium (MEMA) at Resorts World Sentosa a couple of weeks back.

Technically, the Aquarium part isn’t ready yet till 2012, so there’s only the museum, but at admission of $5 for adults and $2 for children 4 and above, one doesn’t have too much to complain about. Even if you add in Sentosa island admission cost), it still beats the more expensive admission price of the Art and Science Museum at Marina Bay Sands.

MEMA’s focus is on the history of ancient maritime trade, and the current exhibition is on the journey of Admiral Zheng He and life and trade on the Maritime Silk Route.

Before going in to the Souk Gallery, at the entrance, you can catch a preview video introducing Admiral Zheng He and his epic voyage from China to the western oceans on a life-size replica of the bow of his ship, Bao Chuan (treasure ship).

It’s a little overwhelming at first for the little ones (a moving, roaring lion head with eyes that flash bright red), but I kinda like the effects. DD liked it enough to want to go back and catch a second viewing.

Behind the scenes, literally (!) is a cross-section display of the goods that Zheng He carried and brought back to display to the Chinese emperor – he actually could fit giraffes and rhinos in his ship. (Those poor animals, I wonder how they ever survived the journey).

There are also full-colour activity sheets printed on sturdy cardstock that your child can fill out details in as they hunt down the answers around the exhibits.

Don’t forget to stop by the activity stations and make your own paper model of a Chinese junk and wayang kulit puppet to bring home. 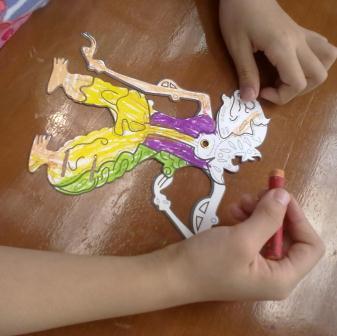 Interactive exhibits also encourage one to stop and learn about Chinese ship building technology and math principles, explore traditional Indonesian dancing and get a picture of yourself in traditional gear, and role play the life and challenges of a port trader. According to the game’s scoring, I’m only an average trader…so sigh, I gotta keep my day job. 😉

What I appreciate about MEMA is the natural daylight. You know how museums are always kind of dark and enclosed, with focused spotlights on the exhibits in recessed spaces? This one is all glass and steel structure, and the natural daylight pours in through the ceiling and clear walls, making it feel very bright and airy. 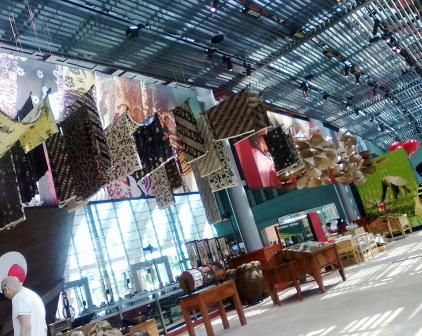 MEMA also has a typhoon theatre. It’s a 150-seat 360-degree multimedia theatre, where you board a sailing ship and follow the story of a father and son who set sail to carry a gift from the Chinese Emperor to Arabian royalty. The ill-fated ship meets a treacherous end in a vicious typhoon. Sad story.  😦

The theatre basically simulates what a typhoon might feel like through movements of the platform, changes in the room temperature, water sprays and scene changes. It’s an interesting experience albeit a tad frightening for our youngest one who clung to me tighter than a baby koala throughout the whole experience. The admission for this is a separate cost of $6 per adult and $4 per child aged 4 and above.

I wonder if they will increase prices after the Aquarium is open. I hope not.
And if they will change their exhibit from time to time. Although that may not happen anytime soon.

Bookmark Monday: Room for a Little One

We have a favourite by Martin Waddell on our shelf titled “It’s Quacking Time”. It’s a heartwarming tale of how a duckling and his parents, aunt, cousin and granda welcomes a new baby into their family, and both our children love the book, especially when we point out the similarities with our family, and replace their names into the characters.

“Room for a Little One – A Christmas Tale” written by Martin Waddell and illustrated by Jason Cockcroft is equally heartwarming; a simply wonderful and wonderfully simple story about who and what Christmas is really about.

It’s a cold Christmas Eve night and Kind Ox is resting, snug in the warm straw of the stable when along comes Old Dog, looking for some respite from the bitter winds. Kind Ox invites Old Dog into the stable. By and by, they are joined by Stray Cat and Small Mouse, all seeking shelter and a warm place to rest, and very grateful for Kind Ox’s hospitality.

Finally, Tired Donkey comes along, carrying a very weary and pregnant Mary and a worried Joseph, for there is no room at the inn.
Kind Ox invites them in too, and as all gather in “the peace of a stable”, they share together the privilege of witnessing the miraculous birth of the most wondrous “Little One” of all – Jesus.

Told from the perspective of the animals, it’s a beautiful story about the true meaning of Christmas, with valuable lessons on love, generosity and tolerance.

The other night as we were driving back from dinner, DD was pointedly ignoring her brother’s questions.

Because a couple of minutes ago, the two of them had argued over a toy that really belonged to her, but that he had brought out from home into the car, and so technically she never had it to begin with, but it wasn’t his to bring out, and…ah, it’s complicated.

DS: Mummy, Jie Jie is not listening to me.
Me: …
DS: Mummy, Daddy, Jie Jie is not answering my questions. Jie Jie, why are you not answering me? You see…she make her mouth like this *purses up his lips*
Me and DH: Well, son, you just argued with her over her toy. Maybe you should give it some time.
DS: Can I make funny faces so that she will laugh?
Me: Hmm, you could try.
DS: Look at this, Jie Jie, look at this! *pulls funny face* How ’bout this? *pulls a series of funny faces*

DD despite her best efforts to keep a stern straight face, bursts out laughing. And so do we all.
Sibling shenanigans, the spice of family life. 🙂

We started making our own family Christmas tree from recycled materials about three years back, and it’s becoming somewhat of an annual tradition. It’s a lot of fun, especially now that the kids are older and more involved in the process. 🙂

If you’d like to try this too, you will need the following materials:-
An assortment of old magazines, scissors, four artblock sheets, brown acrylic paint, blu-tack, craft glue.

1. Cut out various green leaf shapes from the pages of the old magazines. The more variety of shades of green you can amass, the more interesting your tree will be.

2. Paint the artblock sheets completely brown. We use acrylic paint because it produces an interesting textured look.  Otherwise, regular poster paint will do just fine.

4. Next, paste the leaves onto the branches using craft glue.

We’re going to be decorating ours with ornaments and crafts the kids have been making in Sunday school, in the run up to Christmas, and items from our Advent calendar as well. 🙂

A colourful picture book of twenty zoo animals, each of the brief descriptions of an animal is linked to a primary emotion – eager, steady, hopeful, silly, happy, snappy, angry, bothered, gloomy, peaceful…

Written in simple and clear text accompanied by neat and colourful pictures, this book provides a useful base to talk to our children about feelings and emotions and how we can use words as a effective way of expressing both positive and negative feelings.

As an English language teaching tool, you could also talk about the adjectives and how they can be used to describe an emotion in deeper detail, e.g. crafty as a fox…frightened as a rabbit…jumpy as a frog…quiet as a caterpillar wearing knitted socks…happy as a herd of hippos drinking apple juice!

Using digital graphics, Michael Hall creates illustrations that incorporate layers of heart shapes to make each animal.  Which also inspires us to think of pulling out our craft supplies to go cut and make some heart shaped animals of our own. 🙂

In my world: Assorted nature finds

It’s been raining and storming so much in the past weeks that the occasional balmy evenings have been a welcome opportunity to leave the house and get some exercise! I’m just sitting here watching over the kids’ finds on our walk around the neighbourhood…while they’re off climbing and running at the playground. 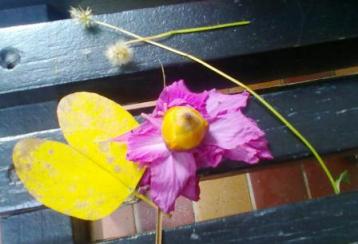 The other day I tried to present lunch in a different and fun way….in a “boat”.
Making the content was simple.  Home made minced chicken patties, blanched veggies and grilled fish. And assembling it took less than a minute.

The stuff which took an inordinate amount of time for what should have been the simplest task…rattling around in drawers for skewers to use as the masts, and looking for clean sheets of paper to make the sails. (Okay, I’m inordinately particular about clean.sheets.of.paper)

In the end, the kids thought that everything about the bread boat was cool, except the sail!

“Mummy, can you take away the sail? I cannot bite the bread properly…”

“Mummy, the sail is poking my face.”

Haha. So much for variation.

Ah well.  On the bright side, it’s kinda nice to know they value the practical over the aesthetic. 🙂

Our little boy is a big fan of construction vehicles. When he picked this at the library, it was just because it had a picture of an excavator on the cover.

But flipping the pages, and reading the book, I’ve found that it’s perfect for bedtime routine and calming down cheeky, energetic little boys you’ve just spent ten minutes chasing and pinning down to put on pyjamas and brush teeth.

Written by Sherri Duskey Rinker and illustrated by Tom Lichtenheld, it has just the right amount of words for a bedtime story (not so long that you risk losing attention, and not so short that you have to go picking another one with a not so long story…)

I also love the nice wind-down effect when you say goodnight to each machine as it powers down for the night. It’s calming for both me and the kids as we read –

Turn off your engines, stop your tracks,

Relax your wheels, your stacks and backs.

The day is done, turn off the light.

I "wonderbee"...everything and all things to the precious blessings from heaven who call me "wife" and "mommy".

I am a working mother who refuses to believe that being a working mom means I have to give up the quality- and quantity-time benefits that should otherwise be available to my kids if I were a stay-at-home mom.

For this season of my life, I write about my attempts to juggle life, family, work and ministry commitments while still trying to stay kickin' alive and sane. (okay…maybe take sanity out of that equation, heh…)

If you like what you see, or see what you like, I hope you will leave me a comment or drop me a note. And I hope you stop by often!

I know therefore I read

I read therefore I know