We’re in Whiteman Park – I forgot to take pictures of the playground structures but they have a couple of well-designed ones that provide a good challenge to children to develop self-confidence and train up their problem-solving skills to navigate their way up the structures.

If you need to make a choice between the train or tram rides at Whiteman Park, I’d recommend the tram. 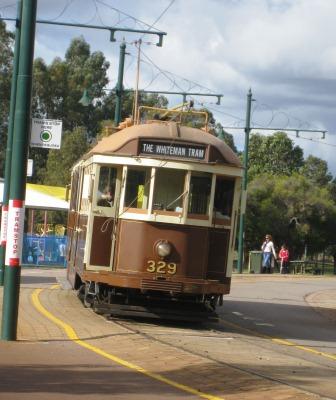 Because on the tram ride, the driver and conductor are more easily accessible to chat with the passengers, tell us about how the tram works and answer any questions we have about the trams in general. On the train, it’s just us and the other passengers, and the driver is in the engine up front so there is less opportunity to learn something about the train.

Shane, the conductor of the tram, gives us a really informative discourse on trams.  It was a highly interesting conversation, and below are the snippets I managed to recall:-

We almost didn’t take the tram. Sitting at lunch, we wondered, “How different is the tram from the train ride anyway? They both run on rails.  And although it’s a different circuit (round the park), the bushland scenery is pretty similar.”

But. As we walked past it, on our way to the car park, DS asks if he can ride on it.

Hmm. The ride isn’t expensive and he gets on for free.  We ask the conductor when the tram leaves next. And he says, “In about half a minute, as soon as the driver gets back.”  And the rest, as they say, is history. 🙂

On our way back from Whiteman Park, we stop at Coles to get some fish to cook for dinner. But it turns out that the whole Bassendean Shopping Centre is closed on Sundays! Alamak…how?

Then DH spots this Fish n Treats corner store. So we walk in, hoping to buy some cooked fish instead.

The proprietor recognises our accents and identifies us to be from Singapore. We strike up a conversation and he tells us that his family migrated from Singapore years back, and now they hold Australian citizenship.

As we leave, he hands us the wrapped package containing the cobbler and barramundi fillets that we’ve ordered, and tells us that he’s included some complimentary chips as well. That was really nice of him.  😀

We pop by home and leave the wrapped package on the dining table – dinner settled, yippee!

The kids awake from their nap in the car, so we decide to visit Cape Lavender for some scones and tea. 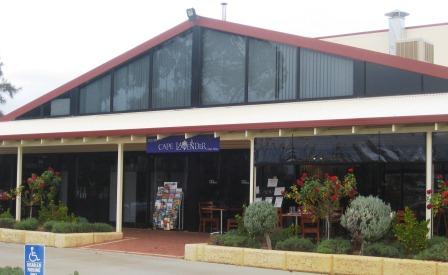 The scones are good. The jam is also infused with lavender, so that makes for a twist on the usual strawberry flavour. 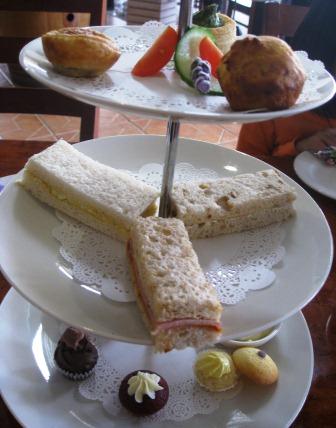 The only thing that spoils the experience is the service quality (or lack thereof). The lady attending the tables never smiles.

And she wasn’t very friendly or forthcoming in locating a table for us. We found ourselves a table for two and squashed our party of five around it, because she said we weren’t allowed to pull extra chairs up to our table. (???).  Anyway, shortly afterward, a larger group vacates their table so we shift to the other table.

I thought lavender is supposed to make one feel relaxed and happy, not morose and taciturn. Maybe it’s just an off day for her, but if that were the case, I guess for today she wasn’t a very effective poster girl to the tourist crowd for the products they’re selling… *shrug*

There are some paddocks nearby with horses in them. After tea, we stroll around and one of the horses comes right up to the fence and allows us to pat him. 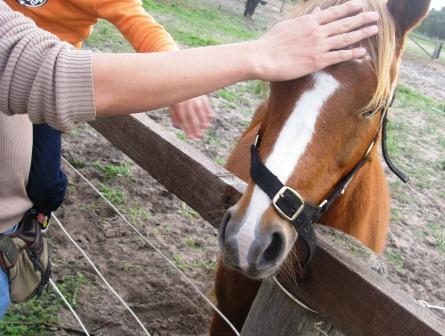 He looks a little like the horse in the watercolour illustrations from a book in our collection – “Horse”, written by Malachy Doyle and illustrated by Angelo Rinaldi.

Can you imagine the joy on our little horse enthusiast’s face? 😀

I "wonderbee"...everything and all things to the precious blessings from heaven who call me "wife" and "mommy".

I am a working mother who refuses to believe that being a working mom means I have to give up the quality- and quantity-time benefits that should otherwise be available to my kids if I were a stay-at-home mom.

For this season of my life, I write about my attempts to juggle life, family, work and ministry commitments while still trying to stay kickin' alive and sane. (okay…maybe take sanity out of that equation, heh…)

If you like what you see, or see what you like, I hope you will leave me a comment or drop me a note. And I hope you stop by often!

I know therefore I read

I read therefore I know